There is another consistency at Roland Garros, beside Rafael Nadal winning the Coupe des Mousquetaires on the final Sunday. (The Spaniard has now won twelve titles.) The first Tuesday of the tournament usually is replete with rain clouds that never seem to dampen the spirit of those in attendance at the French International Club’s Cocktail Reception. The morning weather on May 28th, sported puffy rain clouds. But this year’s downpour began with a blast of hail that softened to intermittent showers throughout the day.

Following the script of recent years, the storm actually abated before the 7:00 pm soirée, which is an annual activity supported by the Fédération Française de Tennis (FFT). Last year there was record setting attendance of near 300. Though an official account was not given for the 2019 gathering, it seemed to be nearly as large.

Thierry Pham is so polished that he would clearly be comfortable hosting the Academy Awards, also known as the Oscars. As President of the French IC and a member of the Executive Council of the International Clubs, he welcomed those in attendance. After his introductory remarks he turned the podium over to Bernard Giudicelli, President of the Fédération Française de Tennis and the Chairman of the French Davis Cup.

Giudicelli pointed out the changes that had been made at Stade Roland Garros, calling attention to the refurbishing of Court Philippe Chatrier and the addition of a new venue,  Court Simonne Mathieu, which is truly an architectural marvel. He added that next year, lights will be added to those two courts, along with Court Suzanne Lenglen, and Court No. 4. But, the pièce de résistance came with his revelation that in 2020, Court Philippe Chatrier would have a retractable roof.

There was an all-star cast on hand. There were so many “Who’s Who” tennis names that it would be impossible to mention everyone. Frew McMillian and his wife, Sally, were part of the mix. So, was Ubaldo Scanagatta, the effervescent Italian who plays an important role in his country’s IC.

Having first met Gail Beneditti, when she was coaching the elite French junior girls, including Amelie Mauresmo, the first question I ask when I see her at the affair is – Are you still undefeated in ITF senior competition? Year after year, her record has been unblemished. But much to my surprise she had finally lost a match. In the middle of May, Heidi Eisterlehner of Germany had downed the former Australian player, who is now a French citizen, in the Women’s 70 final at Cervia, Italy.

Among the Americans, who joined me, to enjoy the festivities were USIC President J. Donald Tansey and his wife, Marie, Jim Lowenstein, Carol McCracken and Mark Lindblom.

The always affable Francoise Dürr (Browning) lived for ten years in Phoenix, Arizona. Over twenty-five years ago, she returned to France and is now residing near Paris. Admitting that it had been a while since she had spoken English, the 1967 Roland Garros singles’ titlist shared wonderful insights regarding today’s “game.” She went on to offer recollections about the slams she had played, along with the special place in her heart that she has for Roland Garros. She extolled the tournament’s panache, along with the wonders of Paris, while chatting with “The Two Marks” (Lindblom and Winters).

While waiting to enter restaurant "Le Roland-Garros", where the cocktail reception was held, I met Etienne Lecoeur of the French IC. We talked a little bit about our backgrounds. Then he mentioned his current focus – Cambodia. It seems as if Lecouer, the founder and CEO of DoubleSlash, a company that among other things provides assistance to needy communities around the world, has borrowed a page from Jean Borotra, who began the French IC in 1929. Borotra was known for his spirit, as well as his concern about the game and those who played it.

Lecoeur is attempting to bring tennis to the disadvantaged in Cambodia. His project is far reaching and insightful. Any USIC members interested in learning more about his plans should contact him at etienne@doubleslash.com

During his speech, Giudicelli noted, “The Fédération Française de Tennis has invested in the future. We have faced some difficulties, but there is a lot of support and passion in the organization (FFT).”

He concluded saying that he hoped everyone enjoyed Roland Garros this year and that they should plan on returning next year to see the new and improved Stade Roland Garros.

As everyone present agreed, 2020 will be memorable for the tournament as well as the French IC. 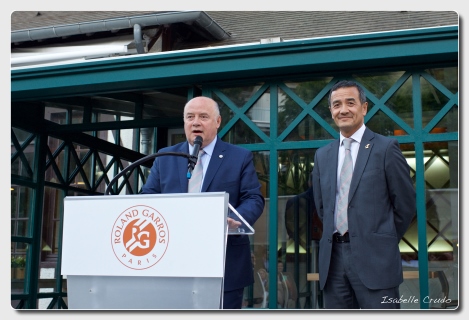 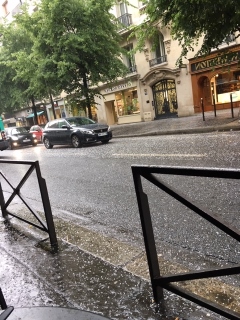 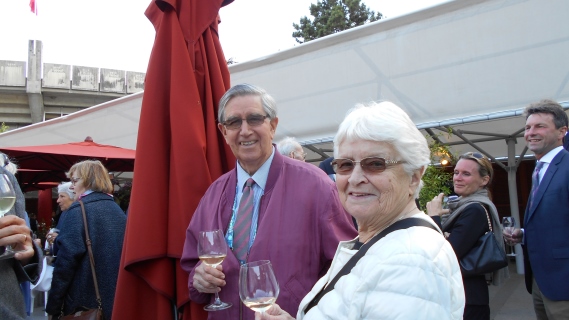 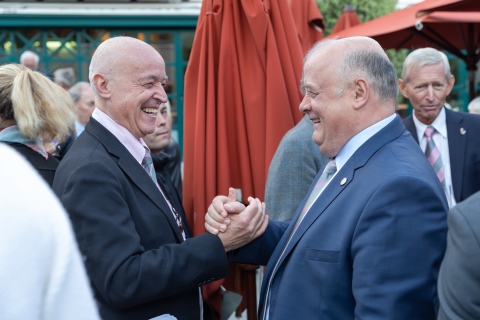